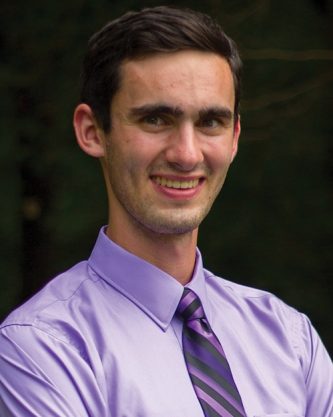 When asked what was his favorite class while at Franciscan University, Isaiah Schick had to ponder—he had so many favorites!

He says Dr. Logan Gage, philosophy, pursued truth and reason through the lens of faith; Sister M. Johanna Paruch, FSGM, and Professor Amy Roberts, catechetics, modeled passionate and faithful catechists in the witness of their lives; Dr. Donald Asci, theology, set virtue and prayer above all other pursuits; and Dr. John Bergsma, theology, inspired him with love for and understanding of the Scriptures.

Isaiah came to Franciscan with enough credits to graduate a year early, but he wanted to ensure he had a solid Catholic education and decided to triple major in theology (his “true passion”), philosophy, and catechetics—three majors he says complement each other very well.

Upon graduation, Isaiah received one of Franciscan’s highest student awards, the John M. Welsh Award for Outstanding Senior in a Bachelor of Arts Program.

Now a seminarian for the Diocese of Superior, Wisconsin, Isaiah says his philosophy background is “invaluable.”

He continued, “I am grateful to have studied under such amazing catechetical leaders as are at Franciscan because a priest really is responsible for catechizing his particular parish.”

Isaiah was a member of the Priestly Discernment Program while at Franciscan, an experience that added to his holistic education.

“The Lord gave me brothers in my household,” he says, “and they challenged me and encouraged me to mature in and to live out passionately my identity as a Catholic man, as a beloved son of God.

“I was equipped to live a Christian life in the world in whatever capacity God calls me to, to become a saint in this new millennium.”